Welcome Aboard the
​USS Conway DD/DDE-507 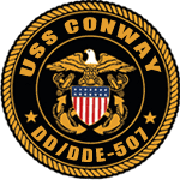 The USS CONWAY was commissioned 9 October 1942, leaving immediately for action against the Japanese in the South Pacific.  She is credited with downing a number of enemy planes, sinking a number of ships and support craft, and many shore bombardments.  CONWAY returned to the US in early 1946, was briefly decommissioned, then re-commissioned in 1951 for action in Korea.  After the Korean War, she participated in a number of significant exercises, including work with TASK FORCE ALPHA, an Anti-Submarine Warfare force testing equipment and tactics to counter the threat of Soviet submarines.  CONWAY was at the ill-fated Bay of Pigs operation and rescued several troops pushed back into the sea.  She also served as a recovery ship during the Apollo space program.  CONWAY deployed to Vietnam in 1966 and is credited with "in-country" service as she steamed up the Saigon River in support of operations there.  She ended her distinguished career as a training platform for Naval Reservists.  Having been decorated with some seventeen Campaign Ribbons and many Battle Stars, CONWAY was stricken from the Register of Ships on 15 November 1969.  Though often attacked from air, sea, and shore, she never lost a man to any enemy.

Since the early 1980's, former CONWAY sailors have been searching for others who served aboard our ship.  The CONWAY Veterans Association
was formed in 1985 with the purpose of reuniting fellow Veterans and providing a platform to further their fellowship and
the memory of our fine ship. Today, it is a tax exempt organization over 400 strong.

In the future we plan to set up or expand several additional features to this website. There will be a Memorial section that can update as needed throughout the year, a "Log Book" section where you may leave your comments and memories and a link to other Navy registries . Under the heading Reunion Archives  we have started to build a Slideshow of pictures from Conway Reunions. Due to the loss of our previous website we need photos from previous Reunions. We have just acquired all of the Older reunion books and will be scanning and mounting photos. If you have any special pictures to share from the the most recent reunion ot any of those reunions prior to 2012 please contact Pam Miller at pammiller950@gmail.com. Digital files are prefered but we can arrange to scan your actual photos and returned them to you.
The CVA normally publishes two pieces of correspondence - the Annual Newsletter and the upcoming Reunion Announcement.  Any shipmate who desires a copy of either, even if he has not paid dues, is more than welcome to it.
​If you are in this situation, please contact the CVA President Jim Godfrey, 304-425-8008.

The 2022 CVA REUNION has been Canceled
Many of you are already aware that the 2022 USS Conway/USS Sperry combined in Buffalo was cancelled due to events beyond our control. The hotel experienced an arson fire and smoke damage last December. The hotel coordinators kept promising that they definitely would be open and ready to host us in September. Unfortunately, we were not informed in June by the hotel the damage more extensive than expected and the hotel would not be open in time for the reunion.
NOW FOR SOME GOOD NEWS
The CVA board voted to begin holding our reunions in the Spring Starting in 2023!
You won't have to wait an entire year to see your shipmates and their families.
The USS Sperry has made arrangements for a combined USS Sperry/USS Conway Reunion in Spring of 2023.
The REUNION will be held from May 7th through May 11th at the Sheraton Airport Hotel in Albuquerque, NM.
Information for reservations will be available soon and complete details in the 2023 News Letter.
And More News...
The CVA REUNION Committee has already started to plan a reunion in Buffalo/Niagara Falls for Spring 2024.
We are exploring NEW Hotels but many of the the same fun trips will remain.
The USS Sullivans is under repair and will be open for tours in 2024 and Niagara Falls will be waiting for us.
CONTACTS
Proudly powered by Weebly