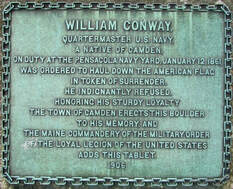 William CONWAY, quartermaster, of Camden, Maine, refused to haul down his country's flag at the surrender of Pensacola Navy Yard to the rebels 12 January 1861. For his patriotic action he was presented a gold medal by citizens of California and in 1906 a memorial plaque was unveiled at his home in Camden in grateful recognition of his heroic loyalty.

USS Craven (Destroyer # 70, later DD-70), 1918-1940. Renamed CONWAY in 1939. USS Craven, a 1020-ton Caldwell class destroyer, was built at the Norfolk Navy Yard, Virginia. Commissioned in October 1918, she operated along the east coast and in the Caribbean area during the rest of that year and well into 1919. In May 1919 she steamed to the mid-Atlantic to serve as a weather and guard ship during the transoceanic flight of the NC flying boats. Craven was generally inactive after October 1919 and, when the Navy formally adopted hull numbers in mid-1920, she was designated DD-70. She was briefly returned to active status in 1921 for fleet maneuvers and local use in the Charleston, South Carolina, area. Placed out of commission at the Philadelphia Navy Yard in June 1922, Craven was laid up there for nearly two decades.

At the end of May 1936, her name was taken away and assigned to a new USS Craven (DD-382). For the next three years, the old destroyer was simply called DD-70 (ex-Craven). In November 1939, after the outbreak of World War II in Europe made it likely that she would be returned to active duty, DD-70 was renamed CONWAY. She was recommissioned in August 1940, but had little U.S. Navy service before being transferred to the United Kingdom in October 1940 as part of the "destroyers for bases" transaction. Renamed Lewes for service in the British Royal Navy, she was employed in the Atlantic in 1940-1944 and thereafter in the Indian Ocean and Australian waters. Removed from active service in 1945, H.M.S. Lewes was scuttled off Australia in May 1946.

CONWAY cleared Norfolk 5 December 1942 for Noumea, and Efate and arrived 13 January. She put to sea 27 January as her force sailed to meet Japanese ships evacuating troops from Guadalcanal. On 29 and 30 January, her force came under heavy enemy air attack in the Battle of Rennell Island. CONWAY splashed several enemy planes, and rescued survivors of Chicago CA-29. Throughout February, she patrolled between Espiritu Santo and Guadalcanal, and between 4 and 6 March, participated in the bombardment of Villa Stanmore and a shipping sweep of Kula Gulf.

From 10 March 1943 CONWAY had patrol duty and conducted training from Efate. She sailed from Efate 15 June in support of the Rendova landings, escorting supply ships, then had the same duty for the New Georgia operations, and conducted bombardments of Kolombangara and Munda. Between 26 July and 12 August, she operated out of Purvis Bay, escorting fueling units and making night raids on Japanese shipping "up the slot." She sailed from Purvis Bay 13 August to take part in the Vella Lavella operation, escorted LST's and supply ships in to the beach, and then took up patrol north and west of the island. She returned to Guadalcanal 30 August escorting transports carrying the First Marine Raiders, and until 12 September conducted night raids on enemy barges off Guadalcanal.

After overhaul in the Fiji Islands and at Sydney, Australia, CONWAY returned to Southwest Pacific operations in October 1943. On 27 October she participated in the initial landings in the Treasury Islands, and then in landings on Choiseul. She supported the landings at Bougainville on 29 October, and until 10 February 1944, she continued operations in support of troops ashore on Bougainville, escorting reinforcement convoys and firing on shore targets. Between 11 and 17 February, she participated in the landings on Green Island, then returned to her Bougainville operations.

Between 28 February 1944 and 17 March, CONWAY bombarded targets in New Britain and New Ireland by day, and conducted searches for enemy shipping by night in the waters off these islands, and until 4 May, continued operations in the Solomons on escort duty, patrol, and in exercises with cruisers.

On 8 May, at Majuro, CONWAY joined the 5th Fleet. She sailed from Majuro 14 May for Pearl Harbor and Kwajalein, where she loaded troops for the Saipan operation, landed them 15 June under heavy gunfire, and served as close fire support and screening vessel off the island. After replenishing at Eniwetok, CONWAY joined in the preassault bombardment of Guam and Tinian, remaining to cover the landings at Tinian. She continued to operate in the Saipan and Tinian campaigns until 12 August, when she cleared for San Francisco and overhaul.

CONWAY returned to Ulithi 21 November 1944 to join the 7th Fleet. She put to sea at once to patrol in Leyte Gulf, join in an anti shipping sweep in Camotes Sea, and fire in the bombardment of Plompon and Ormoc Bay. After replenishing at Kossol Roads, CONWAY covered the Mindoro landings, then patrolled west of Mindoro in the Sulu Sea until 23 December, when she put in to Manus. She sailed again 31 December for the initial landings on Lingayen, Corregidor, and Parang, and continued operating in Philippine waters until June 1945.

On 7 June 1945 CONWAY sailed from Subic Bay in the distant covering group for the Brunei Bay operation. She covered minesweeping and fired in preassault bombardment at Balikpapan, guarded an underwater demolition team as it prepared the beach, and conducted bombardment during the actual landings. She rested briefly at Leyte, and then took part in the landings at Saraganji Bay, Mindanao.

With the close of the war, CONWAY began patrolling east of Leyte Gulf, and supported minesweeping operations in the Yellow Sea, visiting Okinawa and Tsingtao. She put in to Jinsen, Korea, from 20 to 24 September 1945, and then sailed in the China Sea as flagship of the forces lifting Chinese troops from Indo-China to Formosa and Manchuria until 29 December, when she sailed from Shanghai for San Diego, New York, and Charleston, arriving 13 March. CONWAY was placed out of commission in reserve 25 June 1946, berthed at Charleston.

CONWAY was recommissioned at Boston, 8 November 1950, following her conversion to an escort destroyer (DDE). After training, she departed Norfolk 14 May 1951 for Sasebo, arriving 15 June. She escorted a convoy from Shantung to Manchuria, participated in hunter-killer exercises off Okinawa, and screened TF 77 off the coast of Korea. Between 14 and 28 October, CONWAY fired in bombardments at Kolgochi-Ri, Hodo Pando, Hungnam, and Wonsan, and patrolled in these areas. She departed Sasebo 31 October for the Suez Canal, crossed the Mediterranean and the Atlantic, and returned to Norfolk 20 December.

CONWAY operated from her home port at Norfolk on coastwise and Caribbean training operations and on 16 September 1953 sailed for her first North Atlantic Treaty Organization exercise, in the North Atlantic, continuing to a tour of duty in the Mediterranean with the 6th Fleet, returning to Norfolk 8 February 1954. Her training concentrated on antisubmarine warfare, and in 1955 and 1957 she returned to the Mediterranean, in 1957 patrolling the eastern Mediterranean and the Dardanelles during the crisis in Jordan. In the early fall of 1957, she visited ports of northern Europe while joining in NATO exercises, and from January to March 1958, tested new antisubmarine weapons off Key West.

In April 1958, CONWAY put to sea with TF Alfa, a group experimenting with antisubmarine tactics, and through the remainder of 1958, 1959, and 1960 spent most of her time at sea with this force. In June 1960, she visited Quebec City, Canada, and in December of that year participated in the rescue of survivors of a merchant tanker which had broken in two off Cape Hatteras.

CONWAY, along with a few other Fletcher Class DDs/DDEs and USN ships, clandestinely participated in the failed Bay of Pigs invasion of Cuba in April 1961.  So as not to be easily identified as US ships, all hull markings were painted over, so casual observers might think these ships were possibly from some South American country that had old Fletcher Class DDs as part of their fleet.  No one was fooled.  CONWAY was fired on from a shore battery as her Captain’s gig and whaleboat went in to rescue some of the fleeing invasion leaders.  Needless to say, the rescued were furious at President Kennedy's refusal to provide CAP for the invasion as had been promised.

CONWAY was deployed to Vietnam in 1966.  In addition to the usual duties of providing plane guard services for carriers and gunfire support to our forces ashore, CONWAY was one of a very small number of DDs drafting 13’ that were assigned to sail up the Saigon River in support of land forces.  During these operations, CONWAY was exposed to Agent Orange, and Veterans of these operations are therefore entitled to the Agent Orange benefits that are now available to those thus exposed.

In 1968 CONWAY was assigned to a Reserve Training Squadron and re-homeported to Philadelphia.  She served actively in this capacity until decommissioned in 1969.

USS CONWAY's Final Fate:  On 26 June 1970, CONWAY was being towed by sea-going tug, but broke loose.  As it was too dangerous to try to re-attach the cable, the drifting Tin Can represented a hazard to shipping, and the order came for the USS HENLEY (DD-762) to sink CONWAY with 5’ gunfire.  CONWAY lies at Latitude 36 degrees 56.5 minutes North, Longitude 72 degrees 54.5 minutes West, a point 089,7 degrees true and 149.5 miles from Cape Henry Light at the entrance to Chesapeake Bay.  She rests in some 10,210 feet of water.
She was a valiant ship that had served her country well.